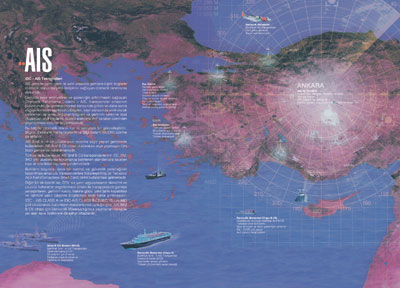 Generally Automatic Identification Systems (AIS) are divided into two categories.One of these categories is Class A systems and these are obligatory for all ships internationally navigation. The other one is Class B and they are used in the ships have cabotage rights. Addiditionally to their main purpose, they have contribution to seek and rescue operations, preventing sea accidents and  emergency actions to occured sea accidents. Besides, Turkish type Class B devices will serve to prevent irregular use of excise tax  reduced fuel, illegal immigration and intrusions of fisher ships to foreign territorial water and hunting.

Presently, IDC produces Class A and Class B devives.The Class A  systems are produced and  marketed according to IMO and IEC  rules with BSH certificate.

IDC is currently working on to develop Warship Automatic Identification Systems (WAIS) on demand of Turkish Naval Forces. Initial products have been prepared and they are now in inspection phase. Addiditonal to Class A systems ,this system have ability of encryption and creation of fake echo.

Class B device is produced with carrier sense time division multiple access (CSTDMA) technology. Information like  position of ship, identity, fuel information are received and transmitted, fuel consumption is approximately calculated and all these information are written on to the smart card. In case of any accident, safety,security and health problems, it transmits information messages. It receives informative messages from shore stations like traffic organisation applications, restricted zones, intrudes to restricted zones and it applies requested rules, it produces and broadcasts related messages in case of any violation.It has 2W and 12.5W VHF power of transmitting feature. Output power is remotely controlled and it changes automatically within the regions identified by shore stations when desired.

IDC-AIS Class B CS device can be connected to the graphic system of the ship and/or ARPA radar by means of an interface.

IDC-AIS Class B CS device is composed of a Transponder and a Contactless smart card unit. Optionally a 7 inch graphic monitor can take place in the system.

We consider all commercial, yacht and fisher ships will use this device with admiration.